While the Wizard's Away...


A lot of the time, the idea for a diorama just leaps out at me. After some convincing, during which the idea jumps up and down on my spine for a few minutes, I enter a sort of mania state during which nothing, be it food, water, sleep, or cats will distract me. This was one of those times.
The first step for me is always figuring out what pieces I'm going to use. In this case, I had a 2" square piece of metal, and a bunch of accessories and familiars from other minis I've bought over the years.
I laid them out before me and thought great thoughts.
Here you see the pieces: The base, a cauldron, a dragon whose base I'd removed some months previously, a wolf, a chopping block, two cats, a ferret, a book-carrying troll, and a cauldron, which you can't see here because my camera hates me. 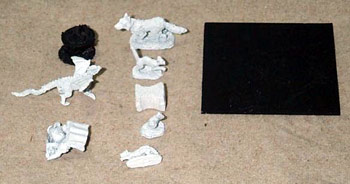 Once I had out the pieces that I believed I was going to use, I set them out on the base, and played with where they wanted to be. My initial thought was that the Wizard had left, and Timmy, the town troublemaker kid, had been turned into a wolf. The cats were being helpful, the ferret wasn't. The one essential thing was that the cat had to be sitting on something, looking at the spellbook. 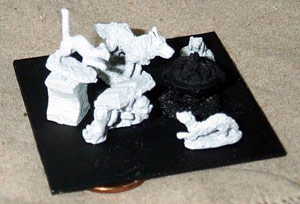 After a few false starts, I thought I had a good enough idea that I could continue. The cat was on the chopping block, looking at the book, the other cat and ferret were fighting, and the wolf was standing by the cauldron waiting for instructions. The dragon wouldn't fit, so he went back on the shelf. 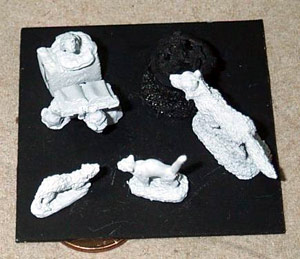 I then removed the bases from all the figures, or as much as I could without damaging their tiny little legs. This was accomplished by way of a toenail-clipper and the emery-wheel of a Dremel tool. 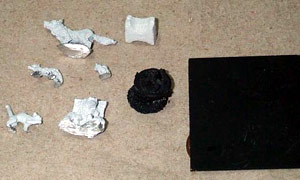 Now, this was to be set inside a wizard's workshop. Wizards' workshops, at least in my world, have wood floors. Here you see the wood that became the floor.

Here you see the popsicle sticks, cut into 2" lengths, glued to the base. If you don't have the patience to cut popsicle sticks, or can't find your saw, you can score the cut with a sharp blade and then snap the wood with a pair of pliers. After that, you just need to sand the ends. 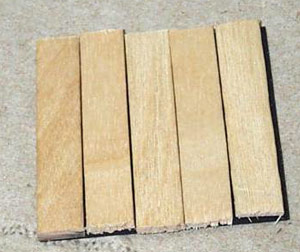 Now that I had the base, I played with the arrangement some more. At this point, I glued down the troll with the book, the spare piece of wood and the cat standing on it, and the wolf. I was at this point starting to feel that my original design wasn't going to cut it. That's when the Dire Grubworm in the background appeared. We'll get to him later. 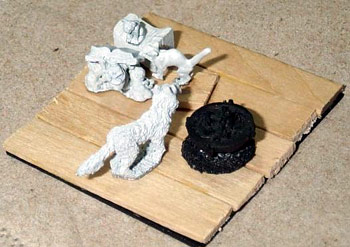 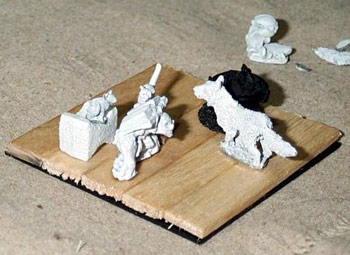 Strange diabolical ideas began to churn, resulting in a complete overhaul of the scene's concept. No longer was Timmy turned into a wolf. The story became one of the ferret stealing the kitty-treats one last time, and getting caught. I constructed a frame out of square toothpicks, gluing them together with superglue, since I have the patience of a gnat and can't be bothered to wait for normal wood glue to dry. The wolf remained to mind the cauldron, and the Grubworm was recruited to hold the rope. More on that in a moment. 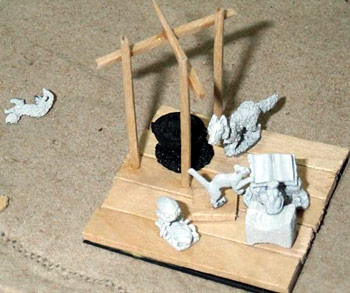 The diorama is approaching its final form. The rope is made from wire from a picture-frame kit, and took about ten attempts to glue down where I wanted it. I really like the way the Grubworm's pose ended up. 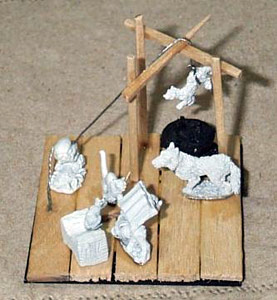 Here is another view. Everything but the chopping block and the cauldron are glued down. 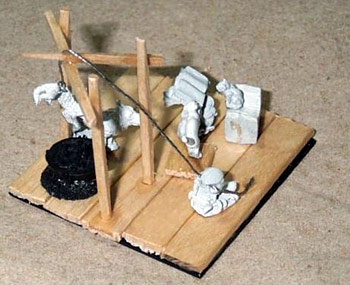 I still felt that the back corner was a bit bare. A quick scavenge through my bits box provided me with a table. The table is a bit of sprue from a CAV model, and I believe the leg is from a CAV flight base. I have no idea what the two lanterns are from, as I found them on the floor behind my desk. Hey, it works. 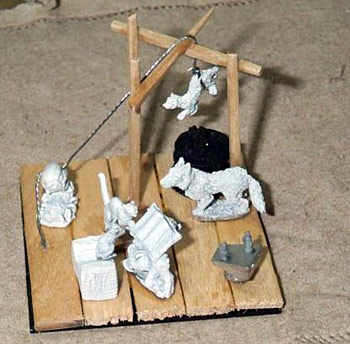 The next step was to prime the model. Here it is. I did not glue down the cauldron until I had painted it. 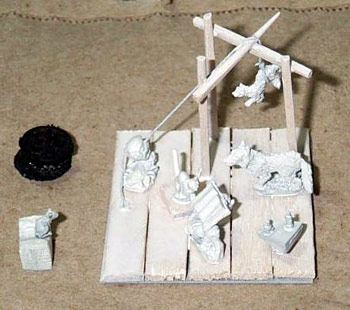 I started to paint the model, wood first. Had I known better, I would have painted everything before gluing them down. It made for some really tricky brush-maneuvering. Aargh, I say. 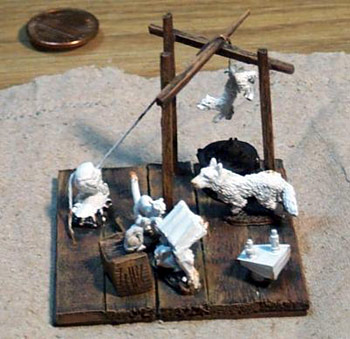 Painting took a while. Look, there I am, painting. Since the article is about making the diorama, and there are much better painters than I out there, I'll just gloss over this part. Short story: Paint to suit your taste and style. 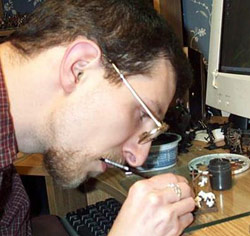 Here is the finished model. I particularly like how the Grubworm and the standing cat came out. Let there be great rejoicing. 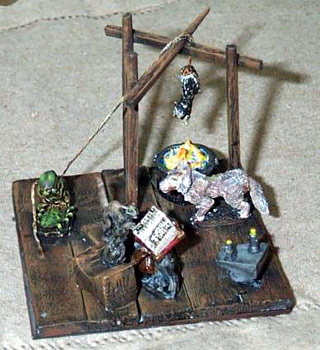 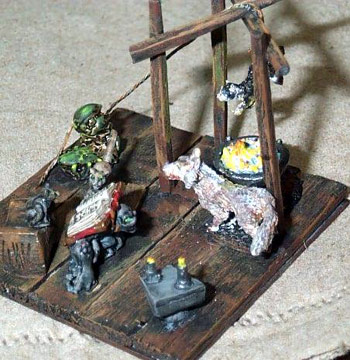 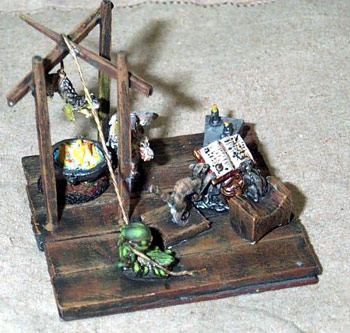 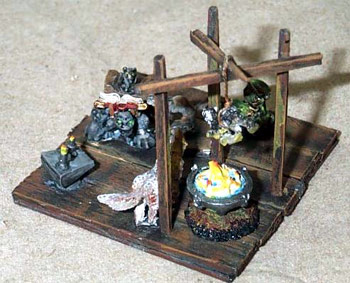 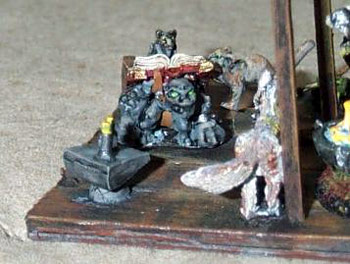