From Fantasy to Sci-Fi, Part 2


Having created Adonese soldiers in Fantasy to Sci-Fi Part 1, I needed someone for them to fight. Once again, I scanned through the Warlord grunt models, and came across the Overlord Crossbowmen. From the picture at least, it looked like all I'd have to do is add a gun barrel to the end of the crossbows and I'd be set. Things are never as simple as they appear, which became clear as soon as I actually had the parts in front of me.


Well, here are all the base figures. 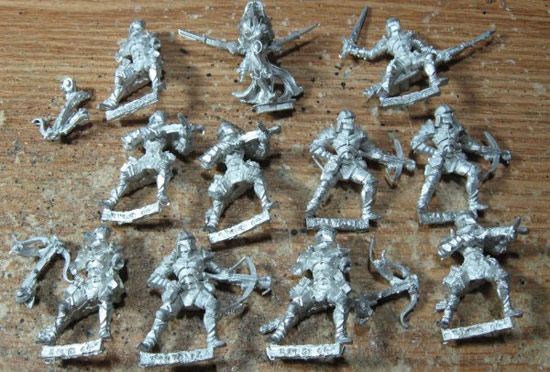 Not only did I have to remove the tips of the crossbows, there was also a lot of stuff on their backsides, like pouches, quivers, swords, and the like. This was all well and good for a fantasy figure, but didn't fit a power-armored futuristic soldier. All that stuff had to come off. 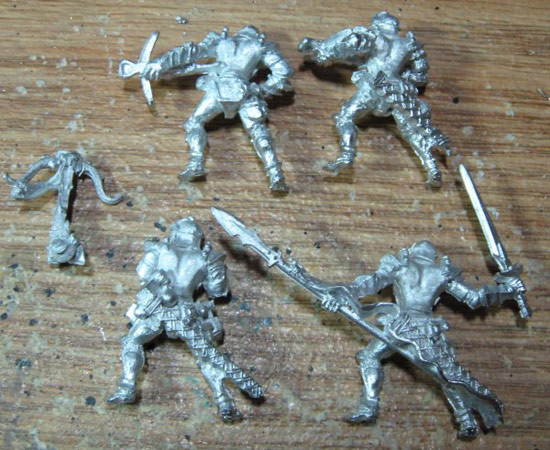 This was easier said than done, especially since all those parts, pouches, and scabbards were molded flush on to the rest of the model. With real easy way to remove them without leaving major scarring, major scarring had to be acceptable. It's "Battle Damage". Really. Anyway, you can see from the picture how this turned out: one of the sculpts in particular lost most of his definition round the backside. I also removed the tabs from the feet, since I follow a rather eccentric basing practice. 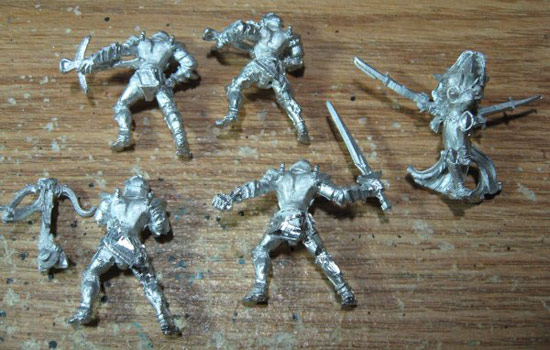 With that painful bit of, well, pain, behind me, I could move on to creating the weapons. This image shows examples of the sorts of cuts I made on the models. I followed the annoying advice one gets when carving a statue of an Elephant: Cut Away Everything That Doesn't Look Like Elephant. In this case I cut away everything that didn't look like the butt of a firearm, since I planned to add the barrels later. 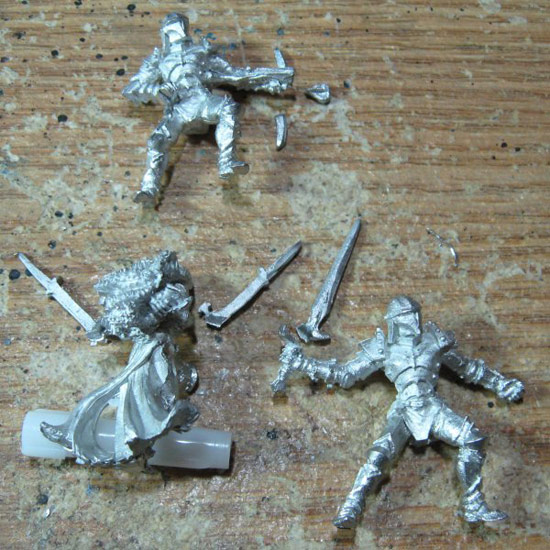 Here's where the CAV parts came in. There's something immensely satisfying about crossing scales and attaching a 10mm tank cannon to a 28mm handle. I cut the barrel off a Chieftain (non-true scale) turret as shown, then pinned the barrel to the end of the crossbow stock. That made for a nifty sci-fi looking blaster rifle, if I do say so myself. 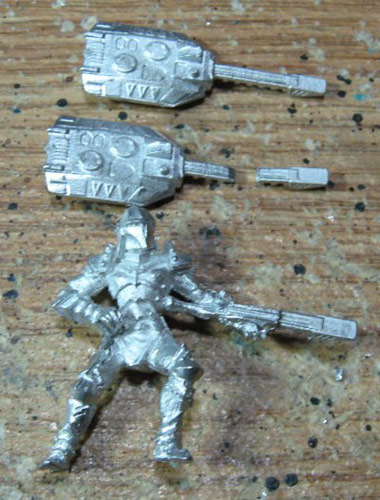 Here's a representative sampling of the three sculpts you get in an Overlord Crossbows army pack. Note the guy in the middle - his weapon looked heavier than the others, so I added the gun barrel off a Sabre AFV instead. I added the bases at this point as well.

Corvus the Sergeant received much the same treatment. I removed the blade of his sword and the entire spear, just leaving the bits of both that he already held in his hands. For the bit of the spear, I just added a bit of a pin to it - that could be a detonator, communicator, whatever you like. 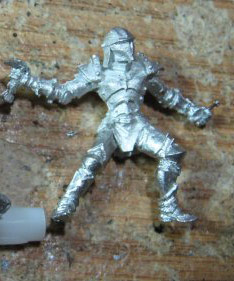 I performed the same basic barrel swap on Corvus as on the regular troopers, but Corvus got a blaster pistol instead. 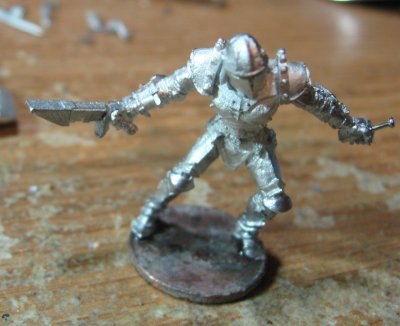 That's pretty much it except for painting. Here's a group shot.

Painting was fairly simple. They were intended to be working minis for the tabletop, so tabletop quality was fine. After priming white, the armor was painted Grey Liner and washed with diluted Brown Ink, (all Master Series paints). The weapons were all painted Gunmetal Blue, and the whole model was lightly drybrushed with Honed Steel. Quick, simple, looks good at arm's length. 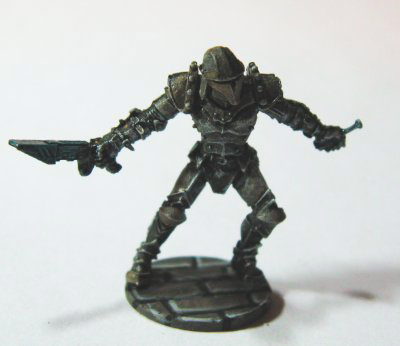 As always, I look forward to seeing how this inspires people. Post your creations on the Reaper Forums!