One of the Reaper employees was (and possibly still is) running a roleplaying game wherein the player characters are transforming robots, reminiscent of a certain cartoon show from the 80s and a wildly successful line of toys. Look how carefully I avoid using copyrighted terms that would explain it all in one word. Go me.
Anyway, he was cutting up toy cars to make his character models. I thought I'd try my hand at it with CAV planes. He put me up to it, actually. I'm naming no names, but his identity is possibly associated with hot-wings.
The very first thing I needed to do was think long and hard about what I was going to use, how I was going to modify it, and how I wanted the final product to look. When making the bot-form, one does not necessarily have to account for every little piece of the vehicle-form, where the legs and arms and guns fit, for example, but one does have to come close enough to maintain verisimilitude. Hey, they never worried about that in the cartoon, why should it worry me now? 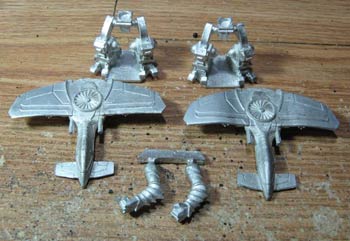 
First thing I did was remove the integral bases from the Dictator legs. I needed the legs and feet to be separate pieces, and it gave me more time to think about how I was going to make this thing while at the same time making me feel like I'm accomplishing something. 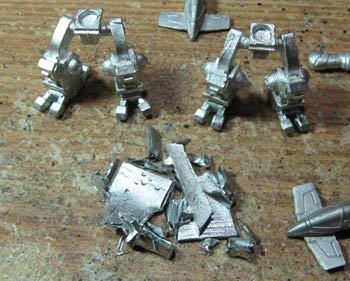 Ok, here's the basic frame I had to work with:

Well, if you squint, the cockpit area looks kind of like a snake head. That works. Maybe I could paint eyes in the windows or something. What you can't do with metal, you can hide with paint, and a jeweled cockpit easily becomes glowy red eyes.
The top of the plane was fine for both forms, but the underside needed a lot of work. I needed a place to put the legs and arms, and make it look plausible in both forms. Well, I couldn't fit the arms or the gun anywhere on the plane-form, so I had to ignore that little incongruity. Fans of Captain Jack Harkness, though, know that gun stowage is never really a problem if the scriptwriter is on your side.
The underside looked like I can fit some feet there, anyway, and they'd fit close enough to where the bot-form would have its hips. That's close enough for a plan at least, and whatever problems that came up later could be solved while actually messing with the pewter. That's next.
Let's work on the vehicle form first, it's easier. I removed the feet from one set of Dictator legs. This was long and involved because I don't have a vise on my desk, and ended up breaking the blade of my jeweler's saw because the metal kept moving around as I tried to saw it. This is why I listed a hacksaw on the tools list instead. For this job, it really works better. 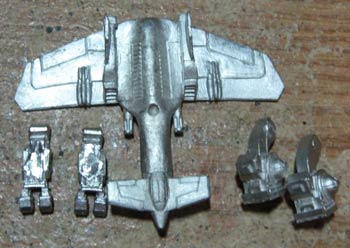 Here's a test fitting on the underside of the plane. Yeah, that works. 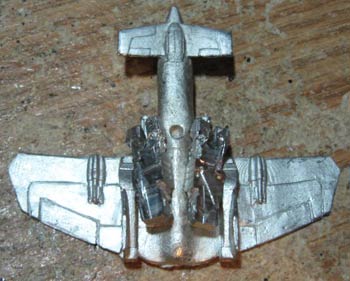 Two small balls of putty flushed out the joints and copious amounts of superglue complete the vehicle-form. It's that easy. 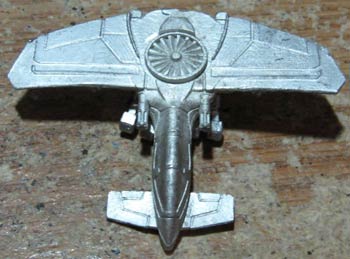 On to the bot-form. I needed the neck to bend forward, like a hooded snake. While this is fairly easily done with thin metal, the neck of a Kikyu is not thin enough to bend without breaking. Here is where the hacksaw came into its own.
I cut two wedges out of the underside of the plane's neck, taking it about 2/3 of the way through the metal's thickness. Any more than that, and the bend would either be too sharp or the metal would break. Any less than that and the metal would either snap or not bend. 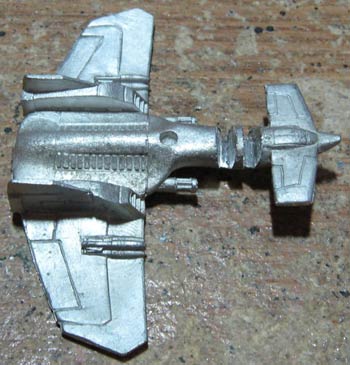 Here you can see how this looked once I bent the neck so that the notches were shut. 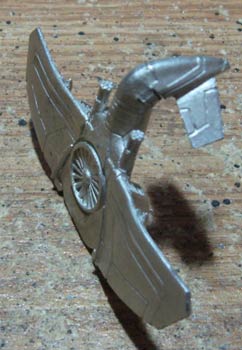 Here's another view - I bent the nose fins down, because really, they look like a walrus moustache at the best of times, why not complete the effect? 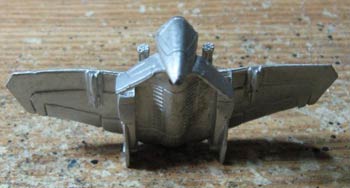 It became clear at this point that this guy would look rather dorky if he just had his wings spread straight out in bot-form, like a giant fake plastic waistcoat. Besides, plane-form bots in the TV show always had their wings moved to their back or something when they became bipedal.
The Kikyu's wings are thin enough to bend, but not at the point where I wanted them to. No matter; a cut along the line I want to fold solved this problem. I use the hacksaw again - the blade is wide enough that it actually makes the fold easier. The cut is again about 2/3 of the way through the metal. 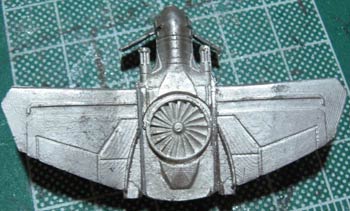 With the main body figured out, it was time to figure out the appendages. The legs had to be removed from the central pelvic piece, so two clips with the cutter pliers took care of that Here's a test lay-out of the arms and legs on the model's belly. That seemed to work. 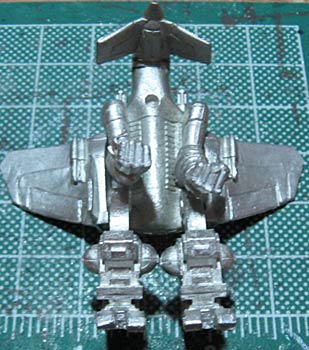 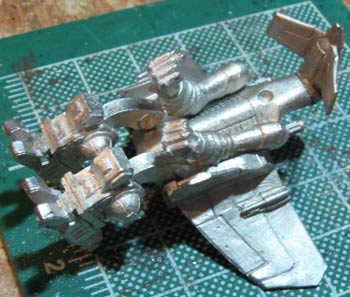 Here you see the legs attached to the hips. We're getting a feel for this bot's stature now; it looks like he'll be hunched over and vaguely lurking. Definitely evil. Yeah. 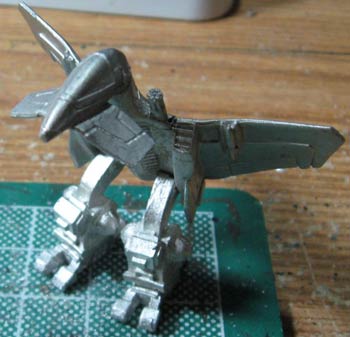 I had to clip the tops of the legs so that they'd rest flush with the body surface where the two pieces joined. There's no way that a plain superglue bond would take the torque that this joint's going to be under either, so I did have to pin both legs on. It's sad really - the bot's not even completed and already he's had to have pins put in his hips.
Anyway, the arms are next. Before I attached the arms though, I needed to make his gun hand, so I could properly pose and attach it so it's not dorky-looking. Suspension of disbelief is one thing; dorkiness is quite another.
Let's see, the Puma CAV's gun looks about the right size. 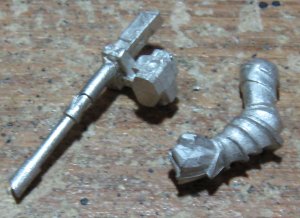 I had to cut the thumb off the fist in order for it to fit correctly though. No matter, what counts here is the overall effect, and you wouldn't notice if I hadn't just told you. Here's the gun attached to the fist. See? You don't notice the thumb. Mostly.

After some posing, finagling, and clipping the shoulder to be flush with the body surface, I pinned the arms to the body, using the same process as for the legs. At this point, construction of the bot-form is complete. 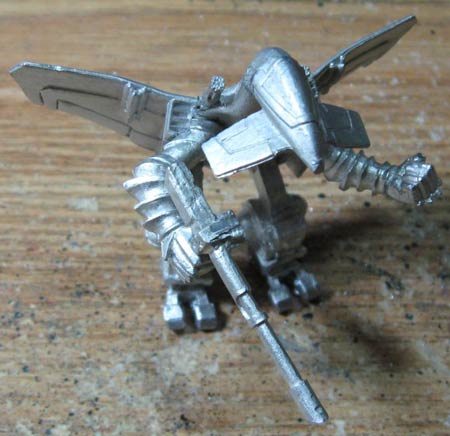 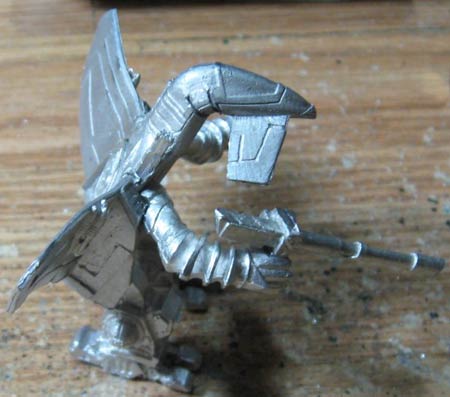 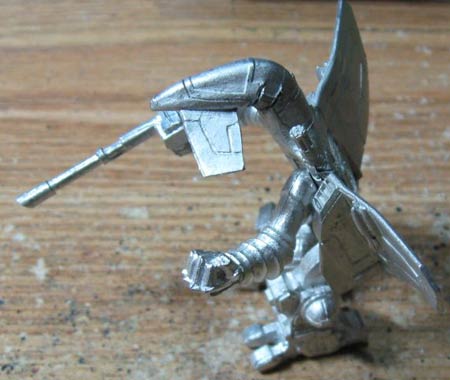 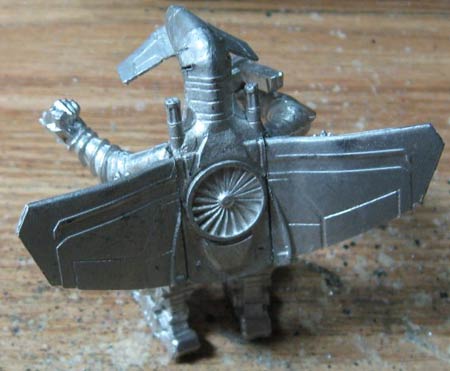 And here's the plane-form and bot-form posing together, ready to be painted. 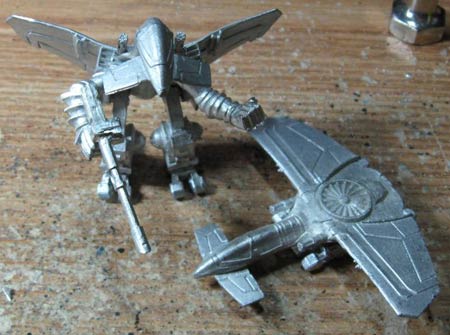 Now he needed a name. Well, his bot-form suggests something serpentine, and his plane-form suggests something airborne. After some juggling of linguistics and a lot of thinking out loud at people in the Unofficial Reapermini IRC Channel, I arrived at the name "Stratoviper". It seems to work. That gave me a better idea how to paint him in order to fit his name. 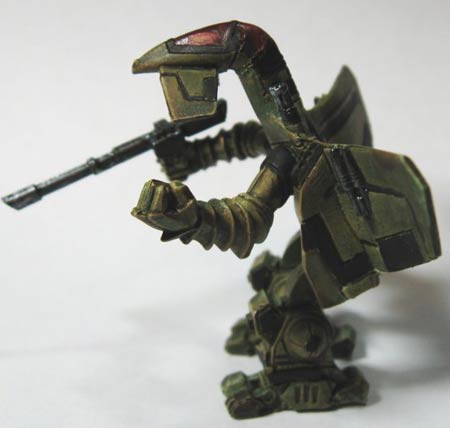 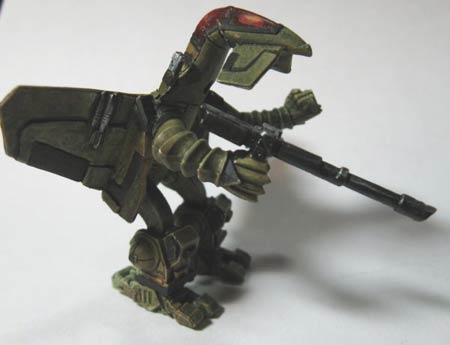 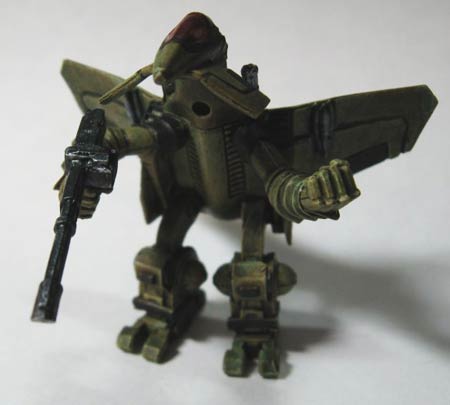 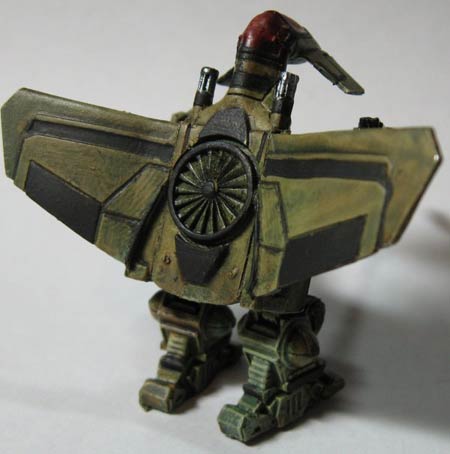 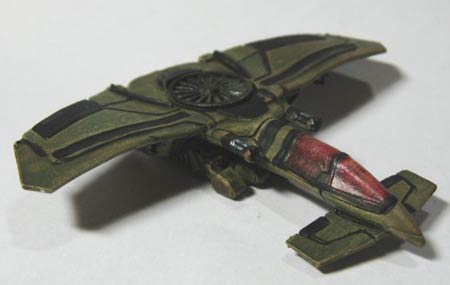 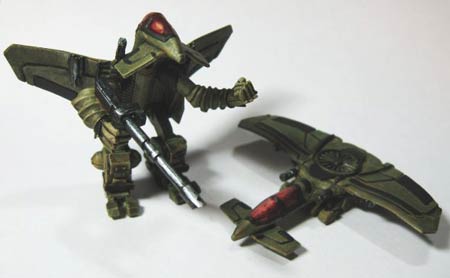 This sort of thing can be easily done with pretty much any Reaper CAV plane. Any cockpit can be repositioned and painted to look like a face. Feet can be made into landing gear and vice versa, and tails can be bent up backwards in the same way the neck was bent here. I look forward to seeing what you come up with, and please do post your creations on the Reapermini forums for us all to see.