For one of my projects, I needed a small frog with a spear, riding a dragonfly. The frog itself is no great difficulty, but a dragonfly was nowhere to be had, not for money, pewter, or cheap dollar-store toys.


First things first - The scorpion tail is long and insectoid enough to serve as a body. I straightened it out, accidentally breaking it in the process.

This turned out to be fortuitous, since I was then able to flip the stinger up rather than down, which it would have been had the tail not broken. I pinned and glued the parts as seen here:

The two dragon heads are going to form both the upper and lower jaws. Here is how they are destined to fit together. Before this can happen though, I need to do a lot of trimming and filing. 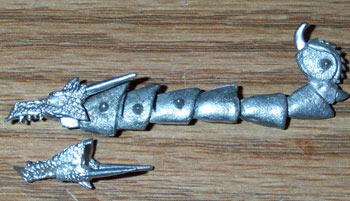 Here you can see the extent to which I had to file, clip, and grind the lower and upper jaws. Pretty much the entirety of the jowls for the lower jaw had to go.

After much ado, the two jaws finally fit together. I still had an ugly seam between the two parts, and the head still had a pair of eyes along the throat. Those will have to be smoothed over sooner or later. 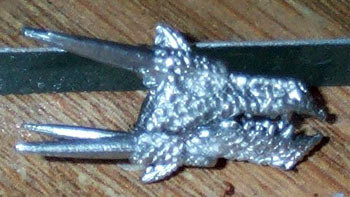 Before I clean up the jaws, however, the head needs to go on the body. I drilled holes in both head and neck, and pinned the two together as shown.

At this point I decided that the lower set of horns needed to go. They just didn't look right. Here you can see that cut, as well as my testing the composition of where the wings needed to go. 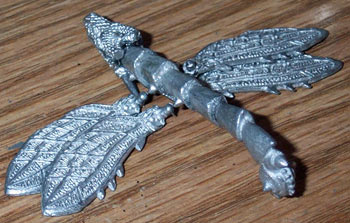 I clipped off the tips of the wings, drilled holes, and inserted pins. I also drilled matching holes along the sides of the critter's body.

It's finally starting to look like a Dragon Fly. The wings, after much fitting, falling, and frustration, finally fitted, and even looked fairly decent in place. Notice the fairly abrupt joints there on the underside, though. That needs some work. 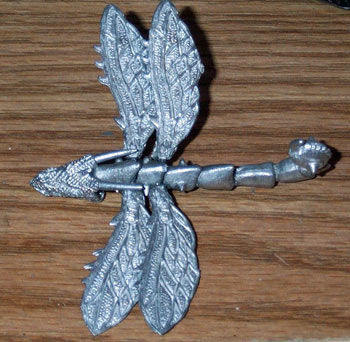 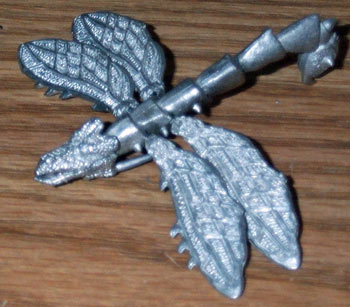 Using a small amount of green putty, I bulked out the joints for the wings, as well as filled in some of the cuts in the jaw. I replicated the scale texture around the jaw using a hobby knife to make cross-hatch cuts. 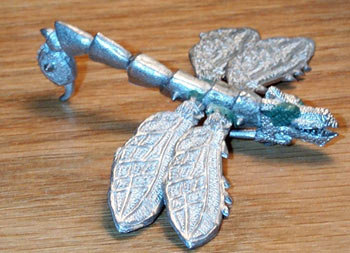 I pondered long and hard about what to use for legs. I couldn't find anything to replicate the legs of an actual dragonfly, at least nothing that wouldn't look like I bent some paperclips and stuck it on. The legs had to come from a donor, and after a while, a suitable donor was found. 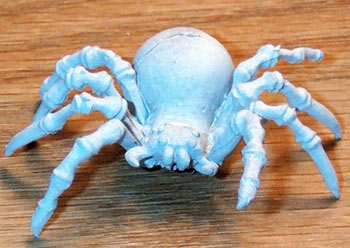 This was probably the most frustrating part of the whole project. Pinning or not, those little legs just did not want to stay where I put them. I almost gave up the project at this point, but by this point I'd already had a frog made and waiting for some days. 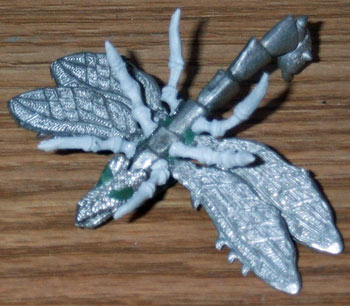 The flight base, for this is a flying creature, was made from a 1x2" bit of sheet metal, plus one of those wire bits you get with CD-ROM drives to eject the drive when the power is off. There's got to be a shorter term for those. Anyway, it left its old life behind and was given a more aesthetic rebirth for the sake of the project. 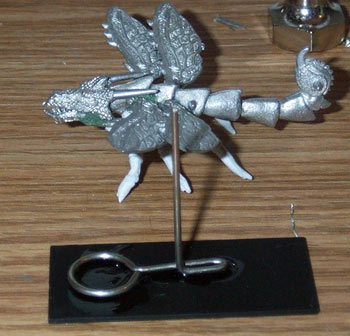 Siiiigh. That's where the flight base is going to attach. Really. I don't want to hear it, ok? 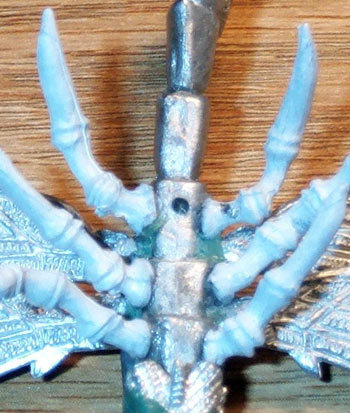 And here the Dragon Fly is actually flying. 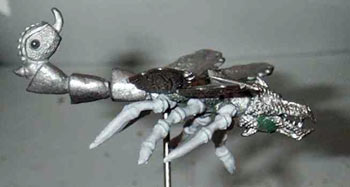 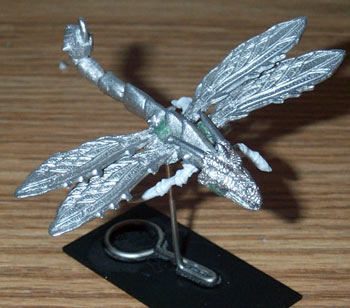 And now we come to the rider. I have a resin mold of a frog. The casting looks somewhat like this, once it's been reposed and given a spear. The spear itself was made of a paperclip and the top of a spear from some model whose name escapes me.

I glued the frog down, and added reins. The reins are made from twisted 24ga beading wire. 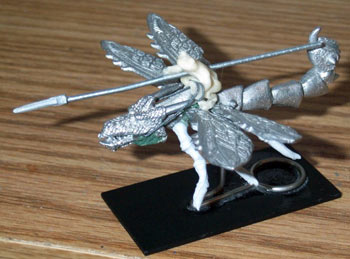 While painting the model, I dropped it, and the frog shattered into tiny bits. I had to re-cast a different frog, and though I was able to salvage the spear, the reins were just too complicated to fit to another frog with a different arm shape. They had to go.
After painting, basing, and posing, Mucklick and Mzzenrezz were able to join the battlefield in all their death-from-above pain-inflicting Meplet glory. 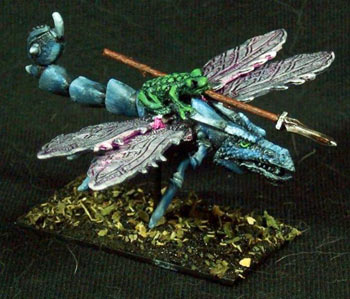