The moment I saw the new CAV flight bases in the Reaper store, I knew I had to have them. The shape immediately suggests the rotating toroid sections used in many sci-fi space stations. I was able to procure four of these bases, and used them with a variety of parts to make two space stations of my own. Here's how I did it:

This one is quite simple, and took me maybe an hour and a half to assemble. 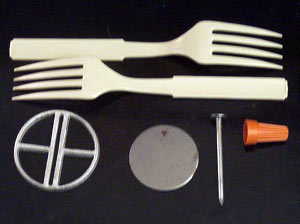 
I cut the tips off the forks about half an inch from the points. 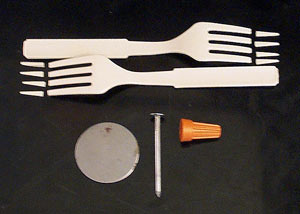 I cut the top third off from the wire nut. There is a spring inside the wire nut and I had to exercise caution while cutting, lest the jeweler's saw either bind, break a blade, or jump from the cut into my finger (again). 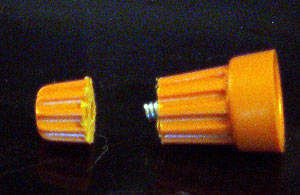 I glued the nail into the center of the base as shown. I left about a quarter inch of nail poking through the other side of the base. 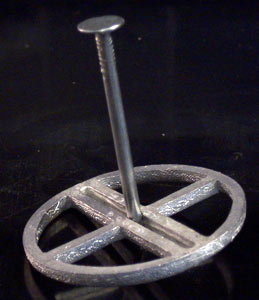 It was this protrusion upon which I glued the tip of the wire nut. 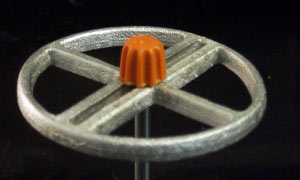 I glued the flat head of the nail onto the steel disc I was using as a base. 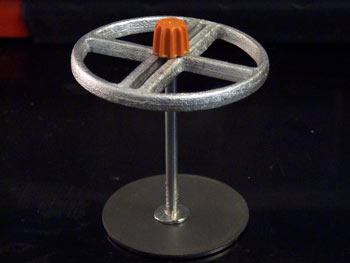 I glued the fork tips around the rim of the base, above and below. We would now be perilously into Scary Lawyer territory, had I not taken care to merely pay homage to a certain studio's copyrighted work, rather than wholesale copying of it. 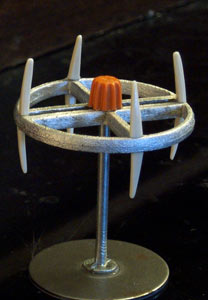 I painted the station. The starfield effect on the base is made by spattering white paint from a stiff brush onto the black base. 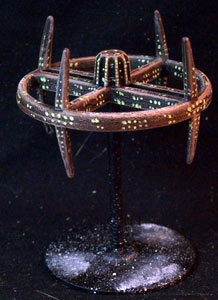 This was much more complicated, and took at least six hours to put together.


I removed the shoulder and upper arm from the Ogre guns, as well as any other framing or mounting bits, as you see:

I glued the guns together, muzzle to muzzle. I did have to pin these joints, as they would otherwise crack apart if I looked at them crosswise.

I glued each connected unit side by side to another, as shown here. These form the two halves of the station's superstructure.

I cut out part of each doubled spoke from the flight bases, both above and below the center line. This was by far the most fiddly step of the whole process. The trick was to cut the gaps at exactly the same height as the Ogre gun, while not deforming the base itself. Since I'm not being compensated for this article by the number of words written, and a picture is worth a thousand words, here's a picture of what I'm trying to convey: 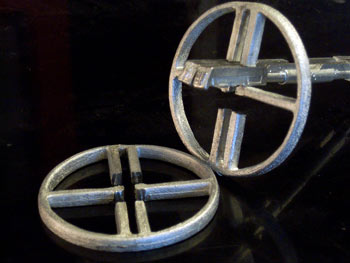 Starting first with the middle, I slid one of the superstructure-halves into the gaps in the centers of the bases. 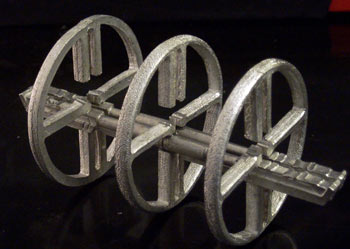 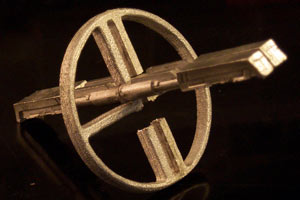 I then repeated the process with the other superstructure half. Getting everything lined up was a rather tricky process, and I had to glue, break, and re-glue all parts involved at least twice before I got it the way I liked it. Finally though, everything came together. 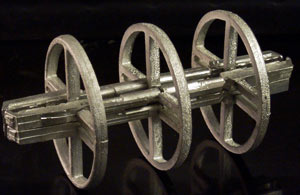 With the station assembled, now I had to figure out where to put those Lupine Rager blades. To start with, I cut all the blades off the hilts and set the arms aside for later.
It's fairly easy to assemble a bunch of parts together and then declare it to be a space station, but there is a surprisingly fine line between a model of a space station and just a bunch of parts glued together. It needed more, and I had to somehow use these eight sword blades to promote the necessary verisimilitude. It was harder than I make it appear here. 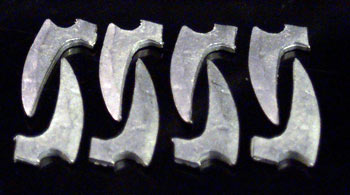 After about two hours of experimentation and gluing blades to my fingers by accident, I hit on the idea of the double-bladed setup you see here. At this point also, I realized that I would only need half of the blades I had ordered. Oh well.

I slid the double-blade assembly into the gaps at the end of each station, between the tips of the two superstructure halves. This seemed to work out better than anything else I'd tried so far. 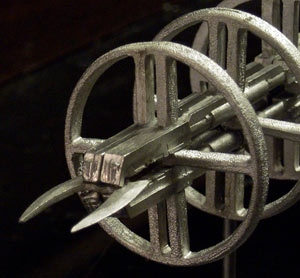 I put the whole thing on the desk and stared at it for a while, occasionally, to my chargrin, making little "pew-pew!" laser noises and whooshes of the imaginary starfighters zooming around it. This part was necessary, and your own work will suffer if you avoid this vital step. Trust me. 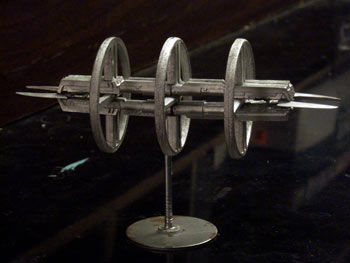 I painted the station. This is the step where a bunch of pewter really and truly becomes a space station. I have forgotten how many conversions and kitbashes didn't come alive untill I had painted them. Even after I'd drybrushed (yes, drybrushed. I shan't repent.) the basic colors, it still looked like just a bunch of parts. If I add lots of little lights though, then it comes alive and becomes Real.
I don't expect that many of you will go out and make space stations exactly like these two. However, if I have at least sparked your imagination, then my job here is done. 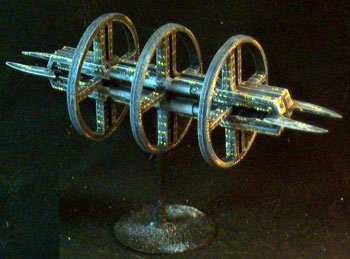