The Ritual of Mashaf, Performed With File and Rotary Tool


The Darkspawn Ritual of Mahsaf is described as being unpredictable in its results, and it creates no two spawn exactly the same. We dragged some prisoners up from the dun- that is to say, we selected some joyous volunteers and went to work. 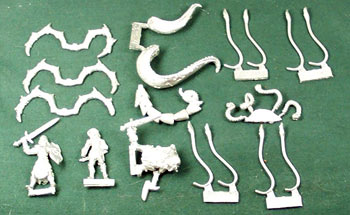 Other bits are pictured, but they did not get used.

Tell your volunteers that this won't hurt a bit. Try to ignore the screaming from here on out.
Remove all the sprue and flash from the models. I used files, clippers, and a hobby knife. 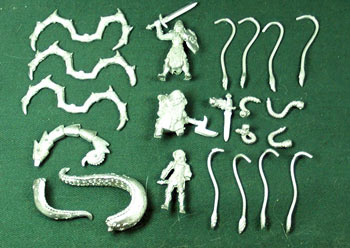 Remove the legs from each mini. This can be done with a jeweler's saw, and I used a 2mm round grinding attachment on the rotary tool to grind out the hip sockets on the Templar and the Elf. I also removed the Elf's arms at her sleeves.

Laugh mockingly at the Templar's attempt to offer Mercy. Instead, remove his head. I used a jeweler's saw to cut around the shoulder armor and then across his neck and back up along the other shoulder armor. Be careful when doing this, as I did break a saw-blade. Use the grinding bit to clean out the cavity. 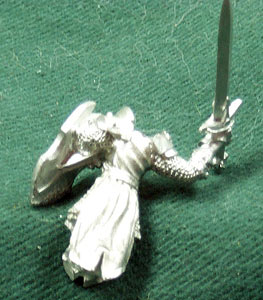 With the eye-stalks, test-fit them on the exposed arms and neck to see where they would fit the best. Trim them to length, and attach them as desired. You will probably need to pin the joins, as they are very fragile if not pinned. I used superglue on all my joins, though some people get better results with epoxy. The Dwarf was screaming about vengeance upon me, yea, my very clan and offspring, so I used the grinding bit to excavate his head. I stuck an eyestalk in the hole, for which he thanked me. 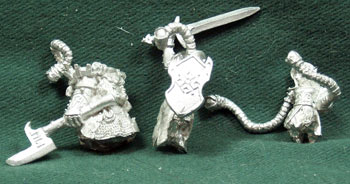 When I was cleaning the sprue off the tentacles, I decided to just cut the tentacles at the base of the sprue. It was a lot easier, and I liked that length better for what I was doing. I drilled two holes in each of the Elf's hip sockets, making sure that the hole was the same diameter as the end of the tentacle. I stuck the tentacles into the holes, and glued them. These did not require pinning, as they were providing their own pin, so to speak. When the joints were dry, I posed them as I felt appropriate. Note: Be very sure that they are dry before you try this, and be careful when you bend the tentacles. They popped out of the holes many times when I was too impatient, and I also managed to break a couple by accident. I took this opportunity to glue the pads down on a 1.5" square for a base. 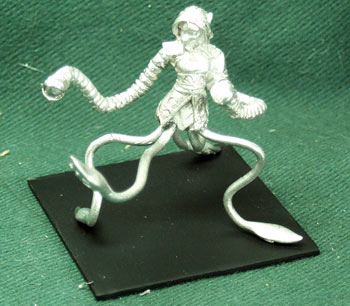 Do the same thing to the Templar. I like how he is raising a tentacle as if in blessing, saying "Calm yourself my son...adrenaline affects the flavor of the meat for the worse." 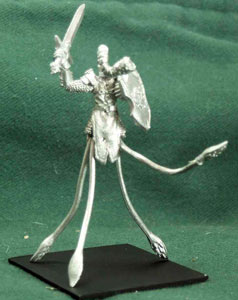 I trimmed one of the scorpion legs to the desired length, and glued it into Durgam's open empty arm socket. That didn't look quite right, so I ignored the screaming and ground out another arm socket just below the first. This is where I attached his real arm. 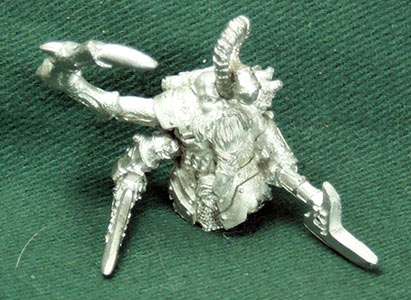 Using a drill bit that was probably 3/16" in diameter, I drilled four holes into the bottom of the dwarf, trying to approximate the location of his hips. I had to exercise caution here, since I could easily destroy the mini (more than already, I mean) if I wasn't careful. Then I took two of the remaining scorpion legs and cut out the middles, so that the remaining bit of the central bar formed a peg to stick into the holes.

I glued the legs into the holes in the bottom of the dwarf. He thanked me greatly, then tried to kill me. I had to hold him off with a bottle of spray adhesive. This is another point where the legs kept falling out and I had to keep regluing them. Oh well, more tokens for the Pain Cage, I guess. 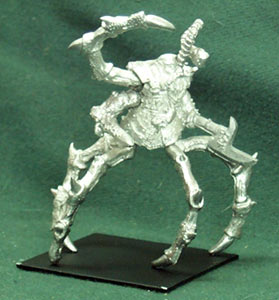 Around the base of each of the tentacles on the Elf and Templar, I formed "thighs" out of putty. Note that if you set putty ON a light bulb to quickly cure, the putty will overheat and bubble. Here, it was a pretty good effect. I extended the pointy bit of the Elf's tunic down a little also with putty, and applied putty to round out the underside of the Dwarf. 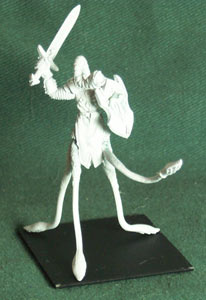 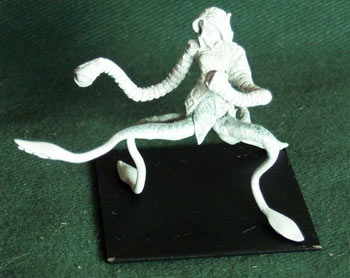 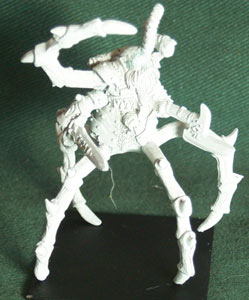 After that was done, I spray-primed them all white.
Behold, the final product. Now the armies of the Witch Queen have three more monsters to send against the citizenry of Taltos. 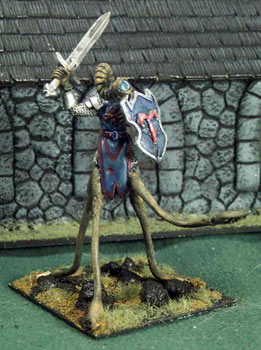 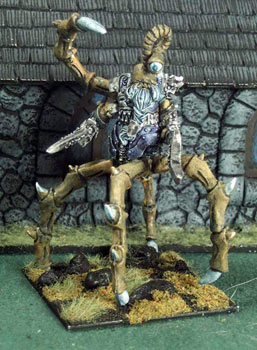