When the Quartermaster Just Doesn't Understand You


The Li'l Death familiar comes holding a glaive. It's nice and cute, but not really the thing you want to be carrying when you're trudging over the dunes after the Nefsokar wizard who has the dubious privilege of having you as a familiar. Sorry, but the glaive has to go.
Using the nail clippers, snip the glaive above and below the figure's fist. Try to get as flush as possible, but be careful to not mar the fingers. I find that the nail clippers cut straight, flat, and flush on the outer surface, and they leave a triangular wedge on the inner cutting surface. If you were clipping your nails, the part left on your finger would be nice and flat, and the clipping would have the wedge, at least if you had pewter fingernails.
Once you've clipped above and below the fist, clip off where the glaive attaches to the base of the figure. You may need clean this with a knife or a file, depending on how clean your cut was. 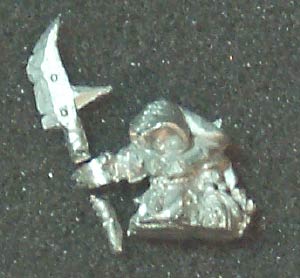 You'll notice that the hand is still holding a plug of the old weapon. Select a drill bit that's a little smaller diameter than the plug, and carefully drill through the plug, from top to bottom. When you're done, it should look like the figure is holding a toilet-paper tube in his fist. 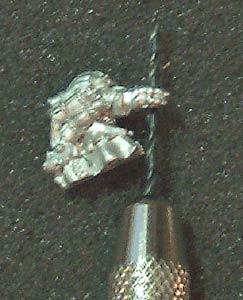 Stick the tip of the hobby knife down into the top of the fist. Position the knife so that the sharp edge is cutting out between the model's thumb and index finger. GENTLY rock the knife back and forward, applying gentle pressure. You will eventually cut the model's hand open. If you do this right, you will make a neat cut between thumb and fingertips, and you will not damage any of the fingertips. The metal is soft and thin enough at this point that it shouldn't be hard to cut at all. 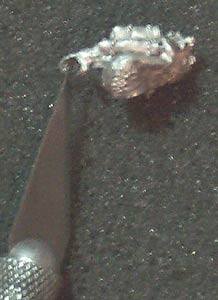 Take your hobby knife and clippers, and cut away at the fist until all of the plug is removed. Remember the joke about sculpting an elephant, where you cut away all the rock that doesn't look like an elephant? Well, that's what you're doing here. Be very careful, since this sort of knife is very sharp and bloody fingertips tend to impair one's modeling ability. If you want, you can use needle-files, but I find that I can do a better job with a knife.
Carefully pry the fist open. Use a toothpick, a fingernail, or something else that won't scratch or mar the metal. This is to allow you to fit the weapon into the model's hand. 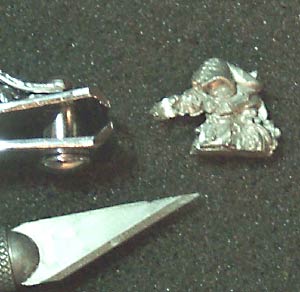 This is the fun part, where you play with different weapons and see how they look with the model. Some of them, like the crossbow pictured here, are way too big for the model, though it is still way too amusing to scream "I waste him with my crossbow!" in a mosquito-death falsetto. 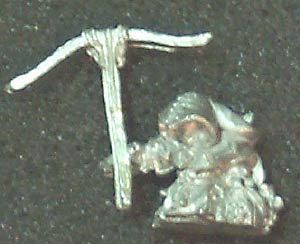 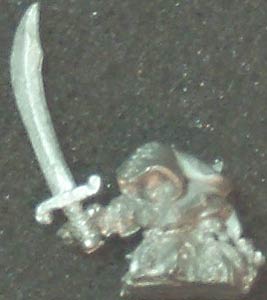 Carefully and gently close the fist around the weapon. I pushed against the side of my desk, but you could push with a toothpick or the end of a pencil, I suppose. Make sure the weapon is oriented correctly, and place a little drop of glue in the fist, where it'll wick its way all through the grip. 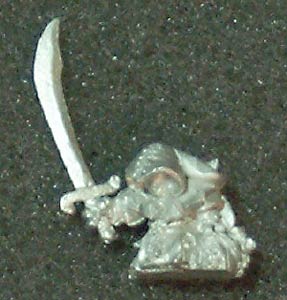 You now have a mini that looks for all intents and purposes like it was sculpted with the new weapon. The major advantage to this method is that you can see the weapon's handle through the fingers. The other method I know of has you cutting out the section of the weapon that would be in the hand, then pinning hilts and pommel to the top and bottom of the fist. I have done both, and I find that the way I described above is actually much easier and gives better results. 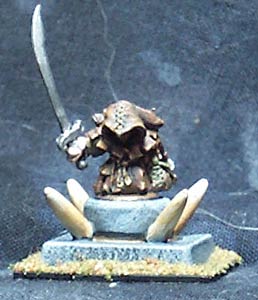 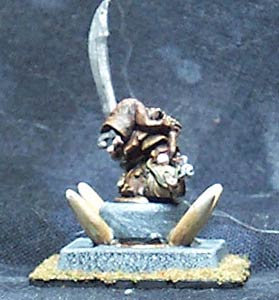 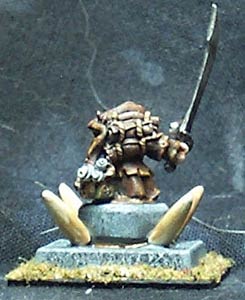 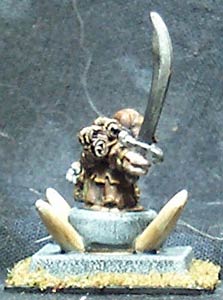 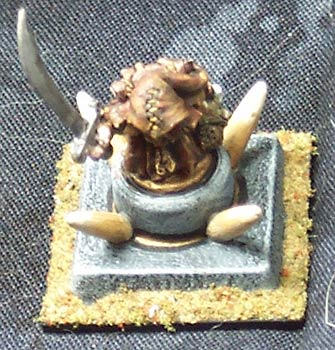