Of Bikers and Butane


I was looking at the CAV light infantry with heavy weapons, and thinking how cool it would be to put wheels on one of them, to make a motorcyclist. As it turns out, this is exactly what I have just done after a year of looking at the parts.
As you work through the article, remember that Kneadatite putty has quite a long curing time, and it is very easy to crush or break what you've just done. Please have a list of handy expletives nearby, and make sure you are well-versed in the situations warranting their use. 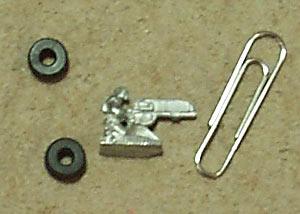 Your first step will be to take apart those poor butane lighters as far down as they'll go. The striker wheels will usually have two outer wheels sandwiching the smaller inner wheel. Rip these outer wheels off. I've done this with parts from a variety of lighter brands, so this shouldn't be too hard. You should end up with one wheel from each lighter, looking like the wheels in the above picture. Save the nozzles too, you can use them as mufflers for the bike if you want.
Now that you've slaughtered and rendered the lighters, take your kneeling infantry figure and file off the front and back edges so that they are flat and parallel. With a tiny drop of glue, attach the wheels to either end of the figure, as shown here. If you are using putty to do this, use a bead of putty the size of a pin-head. 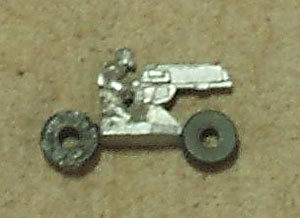 Take the inner curl of the paper clip, and cut it off, so that you have a nice even "U". This will be the tailpipes. You may have to fiddle with this a bit, depending on the size of the paper clip you used. Glue this down to the bottom of the infantry figure, so that the U straddles the rear wheel, and extends just a little past the back. Make sure that the two ends of the U are not strictly parallel, but they should spread just a little bit. This will simplify your life later. You'll notice that This picture does not follow this exactly. I had to do this several times before I got it right. 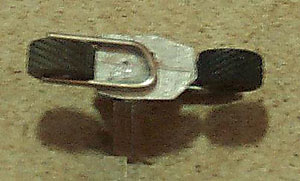 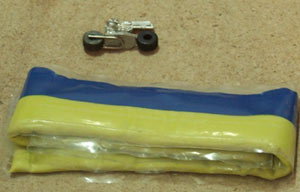 Take your putty ribbon, and cut a strip off the edge that is no more than 1.5mm wide. Mix up the yellow and green, and you should have a ball of putty that is no larger than the head of a pin. 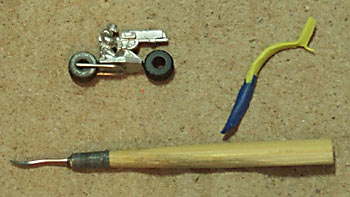 I cut the ball of putty in half, and used one half to fill in the infantry figure from the back of the gun to the back of the front wheel. With the other half, I covered over the top of the front wheel, making the mud-flap. When placing the putty, I would cut a piece to the size I thought I'd need, then I would push it into place and smooth it into shape with the hook tool pictured here.

If you do not keep your tools lubricated, the putty will stick, and it'll be nothing but frustration. I kept my tools lubricated by running them across my forehead every so often. [ed note: Seriously. Someone suggested using nose-oil, but Lanse kept cutting his nose. So be careful when trying this with sharp objects, or try something like petroleum jelly, or even water.]
The tool at the top of this picture is actually the end of a paintbrush with the bristles removed. I used this to put in headlights once I had the basic shape of the wheel-guard.
As you place the putty, always be smoothing the surface with gentle even strokes with the rounded edge of the putty tool. Once it cures, it's very hard to smooth. You are much better off keeping the putty smooth as you place and shape it in the first place.
At some point between this picture and the previous one, I dropped the mini and the front wheel broke off. This was fortunate overall, since I realized as I was trying to repair it that I really didn't like the front wheel cover. It went through several incarnations as I tried to find what I liked, and one of them is pictured here. In trying to repair the wheel cover I used a ball of putty that was about 3mm in diameter. You'd be amazed how far putty spreads when you want it to. At this point I wasn't worrying too much about keeping the edges neat, because I was going to add more detail later.
The string of putty pictured here is what I used to form up the back of the bike. I placed it over the back wheel, and then pushed it into place, again continually smoothing what I'd done. I ended up with a sort of hook shape over the back of the wheel. Once I'd done that, I went over all the edges and smoothed them. 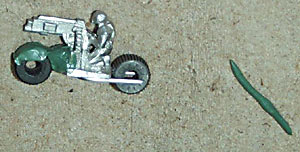 Here you see the bike starting to take shape. This picture is after letting the project cure overnight from the last picture. Everything I did before is now nice and hard, and I'm not going to destroy it by putting down details.
The first thing I did in this second stage was to create the wheel struts. I rolled the coil of putty you see here until it was about the diameter of the paper clip I used for the tailpipe. The wheel is about 3mm from center to edge, so this is how long I cut the pieces of putty I used here. First though, I filled the center of the front wheel with putty, and smoothed it out flush with the edges of the tire. 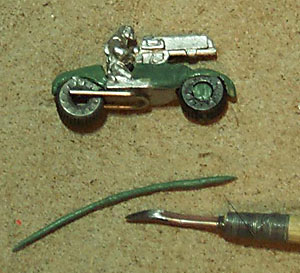 When placing pieces of putty at this small size, I find that I'm really more worried about getting it to the general area of the project I want it, at first, then getting it to stick. When that is accomplished, you can work with your putty tool and nudge it to exactly where you want it, and fix any distortion you introduced while fat-fingering it into place. In this way, I placed two struts on both sides of the front wheel. Once I did that, I smoothed them out some more, and tried to make the axle look natural. 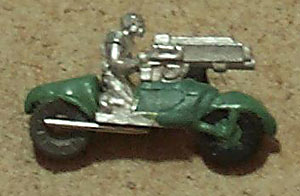 Now we see where I fought the camera and the camera won. This picture is intended to display the coil I used to add the trim around the edges of the model. Notice how the side of the pewter infantry figure is visible there in the middle, and the edges are all rather ragged all over? Here's where I fixed that. 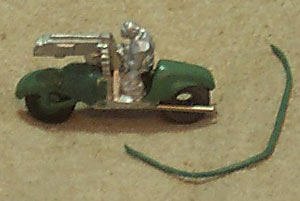 As you can see in this picture, and as you can see better in the next picture, I placed the coil of putty around the bottom edge of the rear of the bike, swooping up over the front. With the left-overs, I edged the bottom of the front wheel-well. When I had this all placed, I gently pressed with my putty tool along the inner edge of this coil, smoothing it into the main body. I went around the entire model several times, making sure it was all smooth and attached. Then I smoothed the outer edge, then the bottom edge. 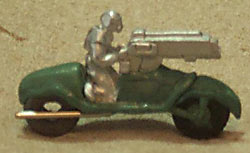 At this point, I realized that I'd forgotten to make a rear-wheel support. You can see in this picture where I fixed that. The piece of putty I used here was smaller than the head of a pin. I let the project cure overnight, then primed it white. 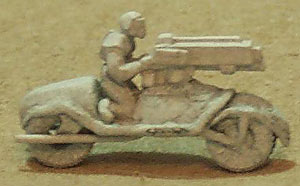 Here is the painted model, placed on a CAV hex-base for a size reference. There is indeed much rejoicing, not least because my camera cooperated in the taking of these pictures.
Since this is a conversion and not an official Reaper model, I can't suggest stats for this model. However, I do plan to create a data-card for this, and post it in the forums on this site. 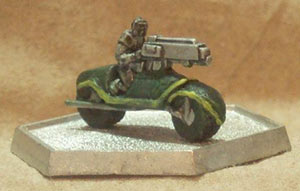